100% Human Edible Food for Dogs. Made with Natural, Premium Ingredients, Real Meat, with No Preservatives or By-Products. 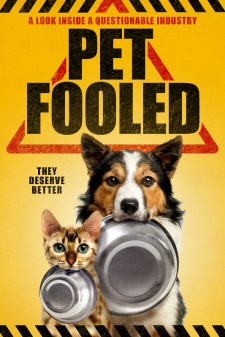 My motivation comes from my desire to improve the quality of life for as many dogs as possible.

"I made this film because I believe every consumer has a right to know exactly what's in the products that they are purchasing,” Harrington said. “Consumers have a right to question the products they are buying and demand transparency from the companies regarding quality, sourcing, and long term health effects."

The filmmakers teamed up with Gathr for nationwide, theatrical on-demand screenings. Health-focused pet food stores across the country are participating in the on-demand screenings, urging pet owners to think about the quality and species-appropriateness of the diets they are feeding to their dogs, cats and other animals.

Local companies that stepped up to sponsor the Kentucky screening include Rudy Green’s, which pioneered the human-grade food movement in 2006 with their gently cooked “Doggy Cuisine,” and Barkstown Road, Louisville's locally-owned boutique that focuses on biologically-appropriate and high-quality diets to help local dogs and cats lead longer, healthier lives, along with offering other high quality products for pets and pet lovers.

The two companies have teamed up to raise money for The Arrow Fund by donating $1 for each ticket sold. The Arrow Fund is a 501(c)(3) nonprofit dedicated to increasing public awareness of all forms of animal cruelty; providing veterinary care and support to animal victims of extreme torture, abuse, and neglect; and encouraging vigorous criminal prosecution of animal abusers.

The film was represented by Joe Della Rossa and Craig Gering at CAA and acquired by Dan Fisher of Gravitas Ventures. The film is produced by Michael Fossat. Tickets for the local showing can be reserved/purchased online at https://gathr.us/screening/18504.

For more information about the Jan. 10 screening in Louisville, contact:

Get notified about new releases.